It is with saddened hearts that we notify you the passing of one of our most valuable members, Dr. Sodsai Jaiwatana, on April 2, 2018, after a long battle with her illness through strong will and courage. She was with her family members and friends during her final hours.

A Siriraj alumnus, Dr. Sodsai joined TPAA as a life member in 1989, since then she had made tremendous contributions to our association by participating in many important projects, medical mission to Thailand, rural school children project, Thailand annual convention to name a few. She had held several key positions in the association, including treasurer in 2010 and most recently she was a member of “Dr. Pipit Chiemmongkoltip Advanced Medical Education Endowment Fund”.

Dr. Sodsai was a warm, sincere, kind and caring physician as well as a person, especially with the elderly, she had won the hearts of those who she touched and her generosity had better the lives of many. Her passing is a great loss of TPAA, the Thai community, and Buddhist temples.

She will be greatly missed by all of us in TPAA and our heartfelt condolences go to her family.

A Buddhist funeral service was scheduled at Wat Dhamaram in Chicago, Illinois from April 5 to 7 with cremation service on April 8, 2018, at Damar Kaminski Funeral Home in Justice, Illinois. TPAA  sponsored the service on Thursday, April 5, 2018, at 7 pm 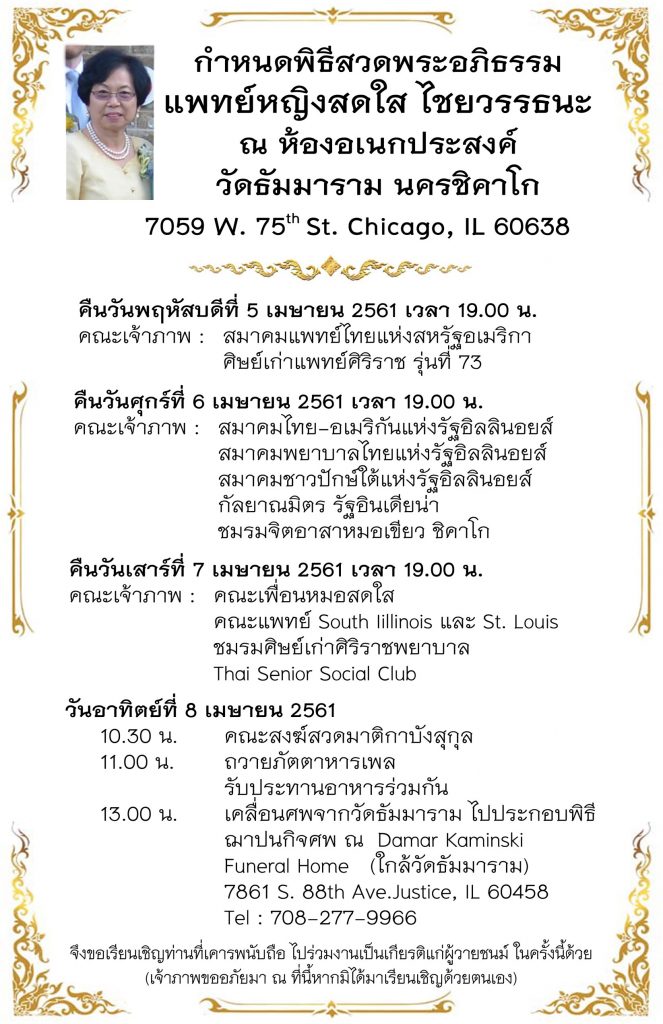 2018 TPAA Officers, Committees and Board of Directors